If you are looking for baby shower games when your friend is expecting twins, there are many games you can make yourself for a great, happy time. When decorating for a twin themed baby shower, play up the beauty of two. Create decorative backdrops by using pairs of blows, flowers, balloons, booties or bottles. Enlarge pictures that represent how fun twins are. Doesn’t have to be human babies, animal babies are cute, too.

Keep the menu clever by creating two peas in a pod desserts, carve a watermelon into an edible baby carriage or pair up olives and cheeses in squares. Drinks can be anything light, but cucumber lemonade is awesome. Add cucumbers to lemonade in a bowl, add Sprite to the mix, drop in ice cubes, and you have an amazing drink that is light, airy, and just right for a baby shower. 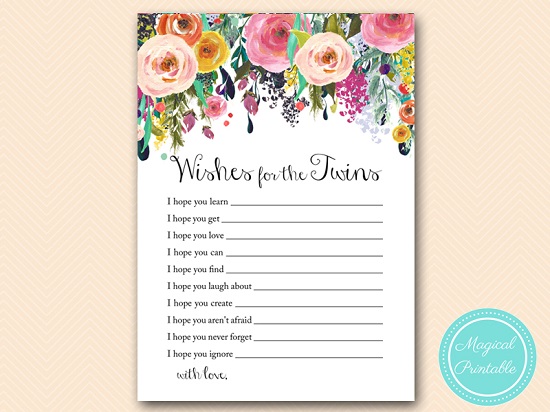 Give your guests paper and pencil and time them. They have one minute to write down as many pairs as they can. Like socks, earrings, gloves, or whatever they can think of. The person that has the largest lists gets a prize. Give out fun prizes that are related to twins.

Pair those Socks is a game where you purchase a dozen pairs of baby socks, make them all different, separate them, mix them up and put in a pile. Guests take turns pairing up as many socks as they can in 30 seconds. The guest who has the most pairs at the end of the game wins a prize.

This game gets to be hilarious. It is tempting to say the word twins, but you are not allowed to at this shower. Hand out, to each guest, a necklace with clothespins on it. Every time you or a guest says the word twins, they lose a clothes pin, and it is given to the one who caught them. At the end of the shower, the one with the most clothes pins wins the game. Give away an awesome prize.

This will keep the party rocking and rolling. Guests pair up into teams, and each team gets two cloth diapers. They also get four safety pins and two baby dolls. When the word, “start” is shouted out teams have three minutes to diaper the baby. Sounds easy? Nope, you can only use one hand each. The team that finishes first, of course, wins the game.

Scavenger Hunts are always entertaining. Hand each guest a bag with five items inside. These five times are one-half of a pair. Each guest has ten minutes to find the matching item. Once they have paired five things, they are done. The person who pairs up their items the quickest is the winner. You can hide the items in other bags or anywhere around the room.